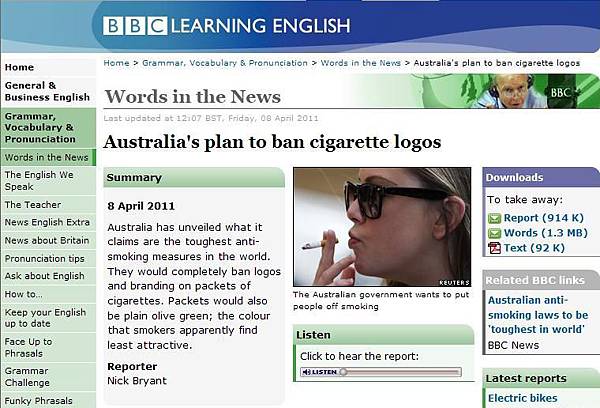 Australia has unveiled what it claims are the toughest anti-smoking measures in the world. They would completely ban logos and branding on packets of cigarettes. Packets would also be plain olive green; the colour that smokers apparently find least attractive. Nick Bryant reports.

The colour olive green is the latest weapon in the ongoing battle between the Australian government and Big Tobacco. Under aggressive new proposals, billed as the toughest in the world, every packet of cigarettes sold in Australia would be packaged in that colour after research showed that olive green was the most off-putting for smokers.

Logos and any form of distinct branding would be completely banned.

Instead, the brand names would appear in a standard size and font, making them as bland and anonymous as possible. A greater area of the packaging would also be taken up with grotesque pictures of cancerous tumours and the health effects of tobacco.

Claiming a global first, the Australian government says it wants to remove any remaining glamour from cigarettes, but the big tobacco companies have questioned the legality of the legislation.

off-putting
repellent, or something which makes you want to avoid it

glamour
something which is viewed as attractive and exciting

legislation
a law or laws passed by a government