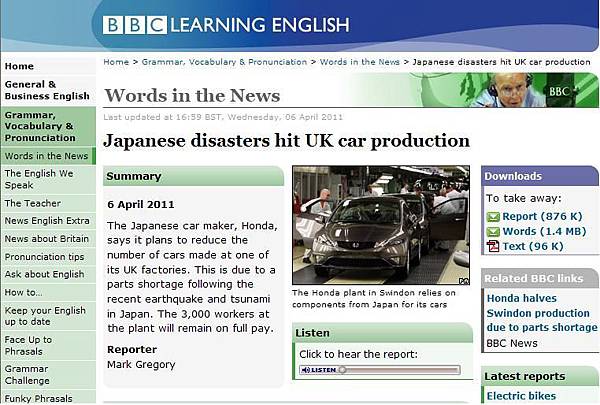 The Japanese car maker, Honda, says it plans to reduce the number of cars made at one of its UK factories. This is due to a parts shortage following the recent earthquake and tsunami in Japan. The 3,000 workers at the plant will remain on full pay. Mark Gregory reports.

Honda says it's cutting production at its Swindon plant, in southern England, by 50% from next week, as it grapples with shortages of key components from Japan.

Wide swathes of Japanese industry are working at well below full capacity due to power shortages, following the nuclear accident at Fukushima. The earthquake and tsunami devastated a region that's home to some key parts suppliers to the motor and electronics industries. The effect is being felt in the supply chains of many companies around the world, not just Japanese ones that rely on Japanese made components.

The problem's been exacerbated by the prevalence of so-called 'just-in-time' production systems, where manufacturers don't keep large stockpiles of parts on-site. Instead, they rely on timely deliveries made just before the parts are needed, more efficient when things are going well, but prone to disruption if the parts don't arrive on time.

production
here, the number of cars made

grapples with
struggles to deal with

rely on
depend on

prevalence of
common use or regular occurrence of

prone to
likely to suffer from