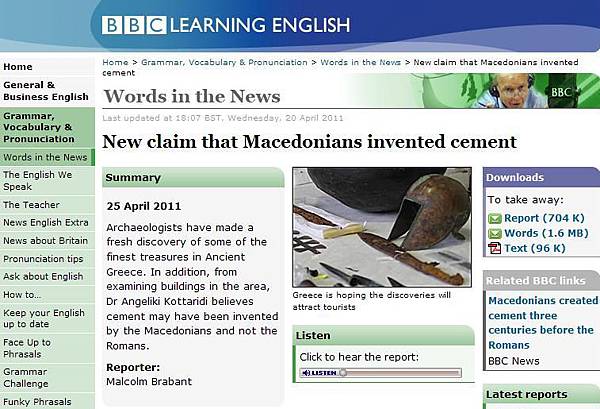 Archaeologists have made a fresh discovery of some of the finest treasures in Ancient Greece. In addition, from examining buildings in the area, Dr Angeliki Kottaridi believes cement may have been invented by the Macedonians and not the Romans. Malcolm Brabant reports:

The discoveries were made in a royal complex adjacent to this humble mound, which is Greece's equivalent of the pyramids.

Recent analysis of buildings here has shown that the Macedonians created cement three centuries before the Romans, who were previously credited with the invention.

At a time when Greece is teetering on the brink of bankruptcy, this discovery is extremely fortuitous. The Greeks are hoping that tourists will flock to see a building that is second-only in significance to the Parthenon in Athens.

These are exciting times in Vergina, because Dr. Kottaridi is planning soon to open one of the sealed tombs, in the hope of discovering more treasure belonging to the dynasty of Alexander the Great.

equivalent of
comparable to

credited with
acknowledged for (doing or creating something)

teetering on the brink of
extremely close to, almost

second-only in significance
second most important

in the hope of
in the expectation of

the dynasty
the empire or era