Japanese garbage island moves towards US 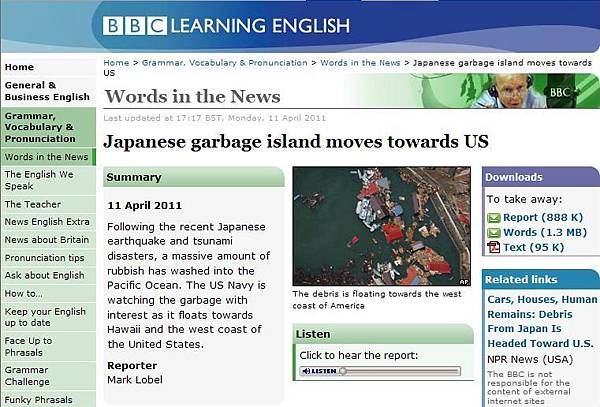 Following the recent Japanese earthquake and tsunami disasters, a massive amount of rubbish has washed into the Pacific Ocean. The US Navy is watching the garbage with interest as it floats towards Hawaii and the west coast of the United States. Mark Lobel reports.

Entire houses, bodies, car parts, tractors and many upturned boats have amassed off the east coast of Japan on an epic scale.

The floating objects have been declared a maritime hazard by the American Navy, which warned they could pierce the body of a boat, or destroy engines in the Pacific's shipping lanes.

The island of debris of most concern, 110 kilometres long, is being closely monitored by the US Navy's seventh fleet, as experts predict it could hit Hawaii's shores in two years and the American west coast a year later.

Hawaiian scientists put it bluntly. They warned that a vast mess that originated in a few moments of destruction in Japan, could eventually foul beaches and reefs off the Eastern North Pacific and kill marine life.

The American Navy's working with civilian construction companies from the earthquake-hit country, as huge cranes and boats are deployed to clear the seas of this vast bobbing mass of wreckage of household furniture, wood, tyres, fishing equipment and other garbage, sweeping eastwards.

an epic scale
a big or impressive size

a maritime hazard
a danger, encountered while at sea

pierce
puncture or damage the outer layer of

shipping lanes
routes travelled by ships and boats at sea

island of debris
here, large mound of wreckage or garbage

bobbing
moving up and down with the currents of the sea