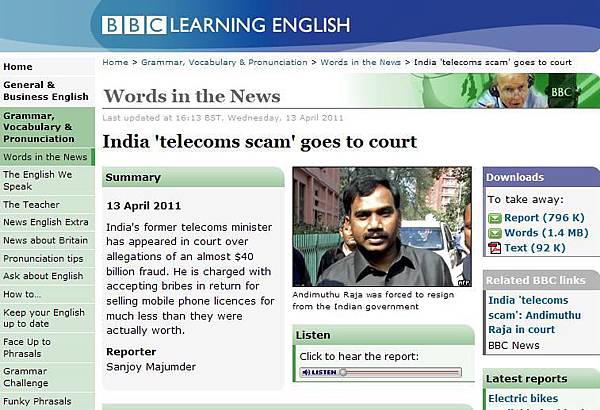 India's former telecoms minister has appeared in court over allegations of an almost $40 billion fraud. He is charged with accepting bribes in return for selling mobile phone licences for much less than they were actually worth. Sanjoy Majumder reports:

Andimuthu Raja and seven others, including two former bureaucrats, will be produced in a special court, which is expected to hold daily hearings, in one of the most high-profile trials in India. He's been charged with conspiracy, forgery and abuse of power. If convicted, he faces seven years in prison.

Mr Raja is accused of selling second-generation mobile phone licenses in 2008, at a fraction of their real value, an action estimated to have cost the government nearly $40 billion in lost revenue. He was forced to resign from the government and was arrested in February and has been in prison since.

The telecom scam has badly damaged the reputation of the government, which has been hit by a series of corruption scandals. Last week, wide public protests, led by an anti-corruption crusader, forced it to begin proceedings to strengthen India's anti-graft laws.

forgery
production of false or fake copies of something valuable (e.g. money or documents)

a fraction of
a small amount of

lost revenue
money which could have been earned

hit by
badly affected by

proceedings
an organised series of events or actions